Apple may have made a welcome announcement for some of its user-base when it introduced the iPhone 12 Mini alongside its vanilla, Pro and Pro Max siblings in October 2020. The device may be light on the pocket in both literal and figurative terms while being easier to use one-handed for most individuals. However, it remains to be seen whether the demand for such things will be worthwhile for Android OEMs to pursue in the future.

One tech figure who apparently believes it is not is Digital Chat Station. This reliable tipster now asserts that no non-Apple company is likely to mimic its latest "new thing", simply because it would be too expensive. The leaker outlined this possibly counter-intuitive position by pointing out that making a screen to fit the 12 Mini has in fact become less and less cost-effective over the years.

This, based on the thrust of the leaker's translated remarks on Weibo, is mainly due to the need to cut the panels down to such a size (something that is less of an issue with a device such as, say, the Mi 10T Pro). This may consume more time and resources for a supplier, thus eventually inflating a final bill of materials for an OEM.

This may be why the only reaction of companies such as Xiaomi to the iPhone 12 Mini thus far involves polling their fans as to their preference for smaller screens. Its sub-brand Redmi, on the other hand, has noted that it might consider the prospect in the future, but is concerned about the impact on battery life (another point against the return of the small phone, in fairness).

Accordingly, Digital Chat Station now denies that any Chinese OEM they know of is seriously considering releasing "Mini" phones of its own. Furthermore, the advent of foldable phones and tablets may also address issues of pocketability going forward in any case. 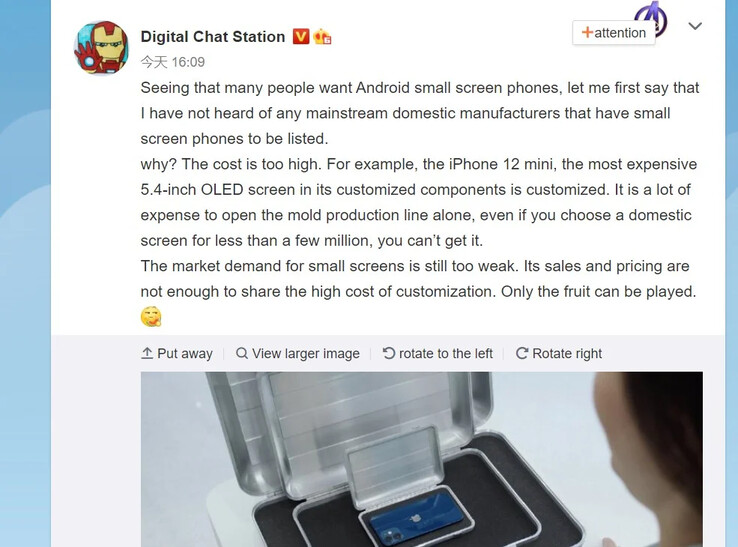